A Storm is Coming 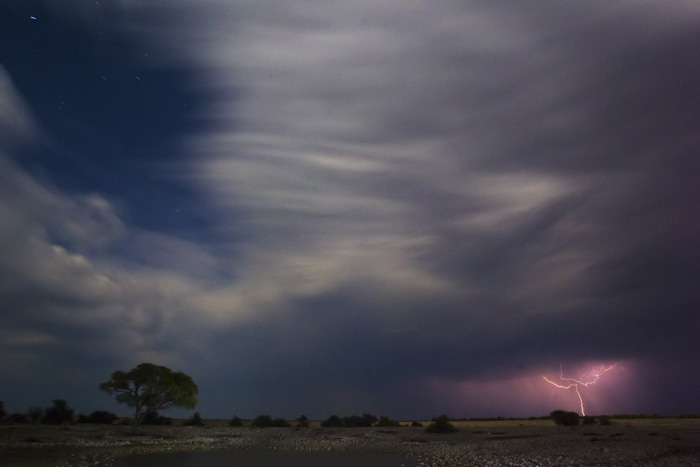 Distant thunder spoke of a storm in the south. And then there was darkness. The power lines had been broken. In the north, a near full moon shone brightly in the sky as fluffy clouds from the south started to engulf it. It was almost 9pm and it had already been another long and hot day. As workers tried to desperately to bring up the generator and restore power to the camp, I knew I had just a small window to go see the beauty of a naturally lit waterhole. I picked up my cameras and rushed to the Okaukuejo waterhole. There was a small pride of lions drinking at the waterhole and four black rhinoceros kept their distance. The moonlight was brilliant and the scene was perfect until someone else also saw the lions. The serenity was soon disturbed by the powerful flashlights of excited tourists wanting to see the lions. There was a massive lightning strike not too far from the waterhole and it was soon followed by the deafening roar of an African thunder. The lions quietly slipped away into the darkness of the trees in the background and the tourists took a break from their flashlights and camera flashes. The blue-black starry sky was being engulfed by the storm clouds as I set up my camera on a tripod. There were two lightning strikes in the same area and I was hoping a third would be in the same place and composed the image with that expectation. Fingers were crossed and the camera was sent on a manual (bulb) exposure setting. Seconds were like minutes and minutes were like hours as I waited. After four minutes there was nothing and I knew I had to stop soon or risk the photo being over-exposed. As I looked down to fetch the trigger remote, I missed the lighting strike. Was it in the photograph? I had to wait. After two hundred and seventy seconds of exposure I stopped the camera and waited eagerly to see what it had captured. YES! There were star trails, moving clouds, the last bit of a blue-black sky and a big lighting strike at the same spot as the previous two times!