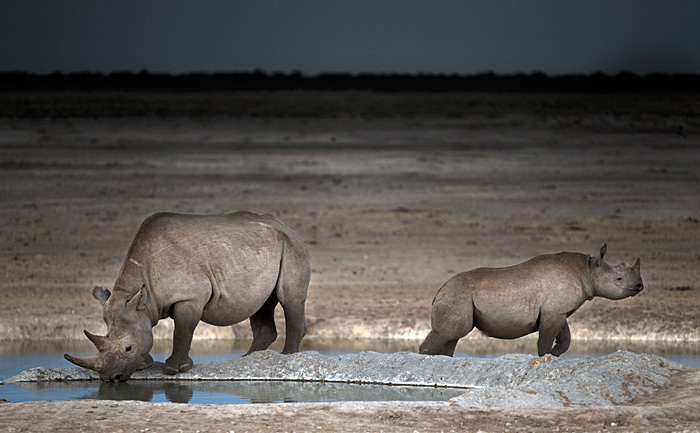 A female black rhinoceros drinks water as its calf looks out.

The sun had already set and in the fast-darkening twilight I could see a black rhinoceros and her calf coming to water. I hoped they would come sooner than later because I had about ten minutes before I had to leave to get out of the park before shutdown. Black rhinoceroses seem to prefer the comfort and cover of vegetation, as they moved to water in a brisk walk. The young calf was not very helpless, but still very playful. The mother drank the water quickly, while the calf chased jackals, crows and other small birds while waiting for mom to finish her drink. The calf did not need water, as she was probably still getting some nutrition from mom? Something spooked the calf and it bolted into the direction from which they had arrived. Mom abandoned her drink and ran behind the calf! The mother and calf continued their brisk walk back into the vegetation. It was just another day in the life of a young rhinoceros.

Somewhere else, at the same time, young rhinoceroses may not be having such an easy time.

“…better not to risk the sound of another shot. The people from nature conservation sometimes come into this area now. We also don’t have bullets to waste on a rhino that has no horns to sell. Let the hyenas kill it…”

The above excerpt from the opening chapter of the book “An Arid Eden” that I read recently. The book is an account of conservation in southern Africa, and Kaokoveld in northwestern Namibia in particular. The excerpt is a conversation between two poachers who had just killed a female black rhinoceros and chased away its helpless three-month old calf. A rhino without a horn is not even worth a worthless bullet! There’s no doubt that the young calf died a horrible death – perhaps hyenas started eating it alive as it lay down exhausted, maybe it starved to death somewhere in the middle of nowhere, or perhaps a humane poaching group found its death worthy of a wasted bullet. Who knows, or cares?

The poachers perhaps sold the horn to a middleman for a fistful of rands, and bought themselves a drink or some narcotics. Perhaps, the horn then went through a series of middlemen into an East-Asian country. Perhaps, the quacks then went about making magic potions for those suffering unmanly ailments. Buyers, whose favorite pastime is perhaps torturing babies to death, perhaps paid a handsome sum of money for a piece of keratin — a protein which is in their own hairs and nails, if they have any. Again, who are we to question their fairytale beliefs when a vast majority of the human world thinks evolution isn’t proof enough for the nonexistence of God? Interestingly, the countries that actually believe in rhino horn magic are officially atheist states. You would think that it would be easier enforcing a rhino horn ban than banning religion? Again, who knows, or who cares?

Inhuman is an apt word for the act of the poachers. It happens all the time in the animal world. In my non-scientific personal observations, I’ve seen dozens of helpless young zebra foals that have been abandoned. Maybe a lion attack separated the calves from the herd, or perhaps the mother scarified herself in a vain attempt to save her offspring — which has no chance of survival without the mother? Young springboks are a favorite for the jackal packs. The young of the animal world are apparently damned and vulnerable, which is perhaps why the defensive maternal instincts are so strong among the animals? Again, who cares?

I can’t help thinking that the days of free-ranging rhino, and any other large animal in general, are numbered. In most countries, more than 90% of the land is reserved for human use and even the small percentage of protected lands are under constant threats of all kinds. The reasons may be complex, but in the end are just too many bad people, too many ignorant people and worse — way too many people who don’t care.

Each time I see the rhinos, elephants or any large mammal with young offspring, I see that their lives as parents are not much different from a human being with a newborn. Easier in the wild, perhaps, because the animal children are more advanced and independent than newborn human babies? You see things differently if you can relate to them, and begin to add personal and distinctly human emotions and values to them. I’m sure everyone’s experienced that feeling. Which is why anthropomorphism is an evil word in behavioral science? Even as a non-ethologist I can see why it is so. However, I think we, as humans, are selfish and would only think it is worthwhile to save something if we can relate to it. And for the sake of rhinos, and everything else, I do hope more of us start seeing the emotional and instinctual similarities that we share. 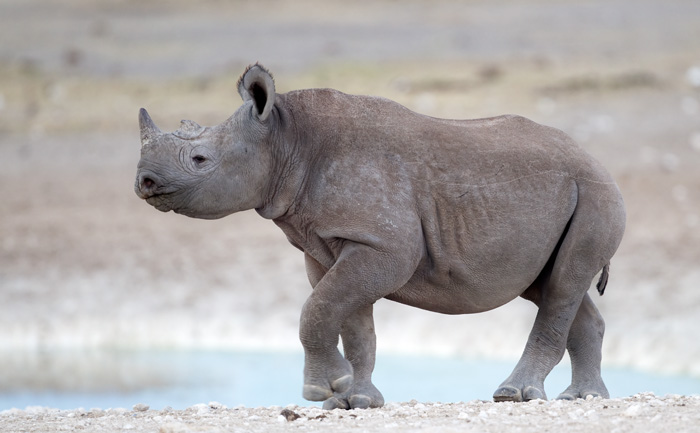 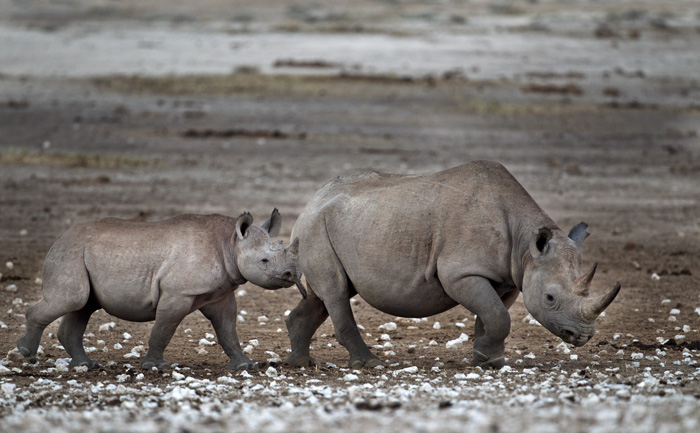 Rhinoceros mother and calf making their way to water 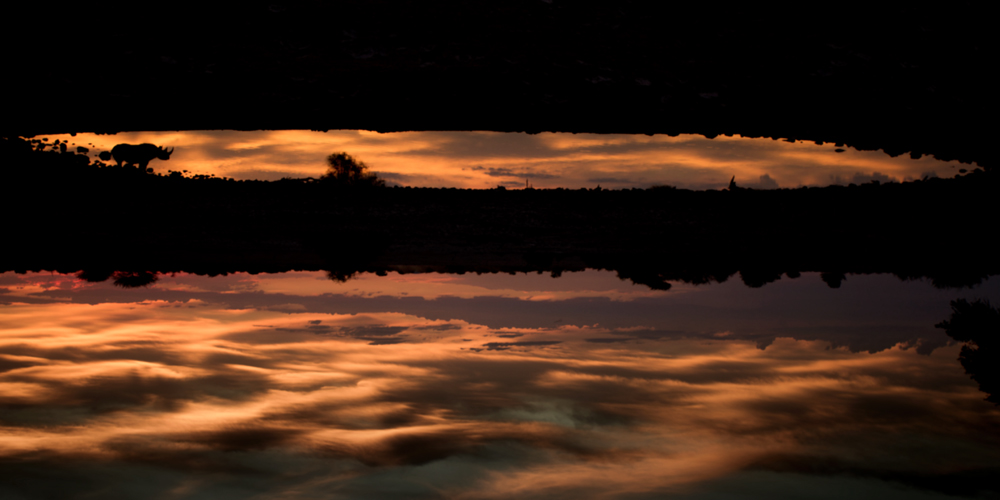 A rhinoceros at the Okaukuejo waterhole